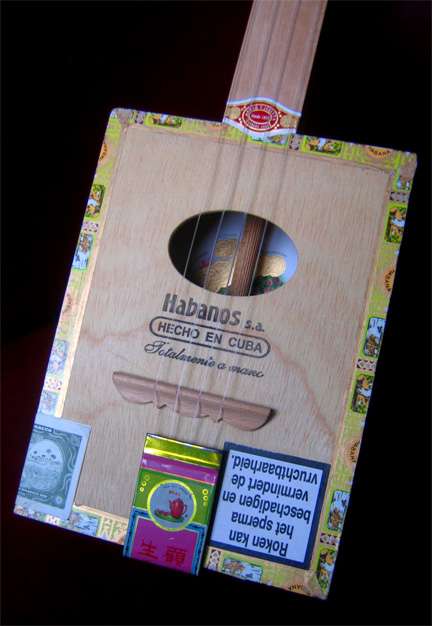 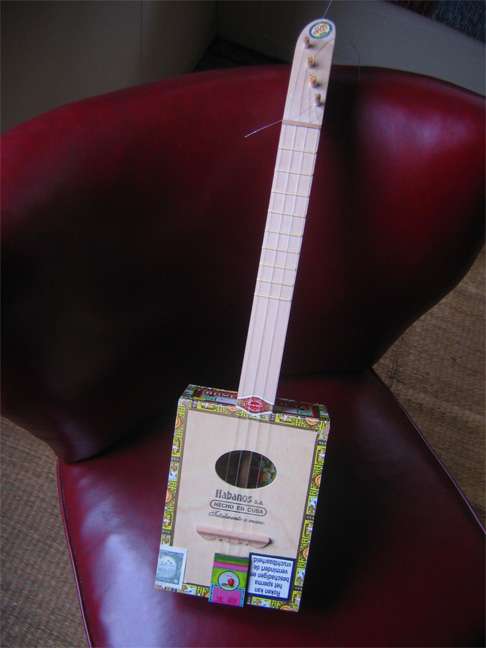 Here it is. My first Cigarbox Ukulele...And ain't it sweet! In building it i had a rule: I wouldn't buy anything new to make it. Everything had to be found, given or second hand. The 'Romeo y Julieta' Cigarbox was given to me by van Dalen Rookartikelen, a really nice family owned tobacco specialist shop here in Rotterdam. The warning lable on the box is a hoot...it says that smoking can damage your sperm. Watch out Romeo!


The frets are made of bamboo which i cut out of an old placemat. This was very tricky work indeed. They have to be exactly the same height of course and boy did it take me a long time to try to get this right.

The neck is made of Maple and the bridge is made of some scrap trim i had left over from another project. 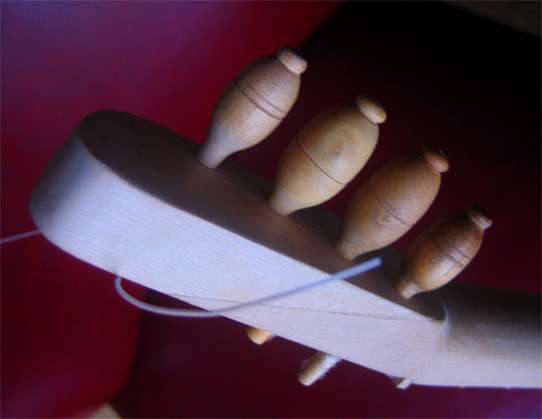 I was really at a loss about what to do for tuning pegs. During one of my weekly trips to the second hand market i found these 'thingies'. I had no idea what they were but i was pretty sure they might just work. I found out later that they are spools which are used to make lace. I bought a whole batch of them for 50 cents a piece. I think they look really neato.


The string guard was cut out of an old chinese tea tin. I love this part of the ukulele, really adds that extra 'oomph' to the whole design. And lastly, the part of the ukulele which i cheated on by buying something new, the cigar band on the fretboard just above the body. I really wanted one and i couldn't find one second hand so i had to buy a cigar to get it. That sucker cost me 10 euros! It is by far the most expensive part of the whole ukulele.


I think it turned out swell although I have to admit that two of the frets need replacing. They're not quite right and this causes a buzzing sound with some chords. But, for a first attempt, i think it's pretty damn good! If you'd like to see this ukulele in person and you live in the Rotterdam area then boogie on down to the WittedeWith Straat and stop by Galerie de Aanschouw where it is being displayed this week. By the way, the presentation party was absolutely fantastic. More about that later! 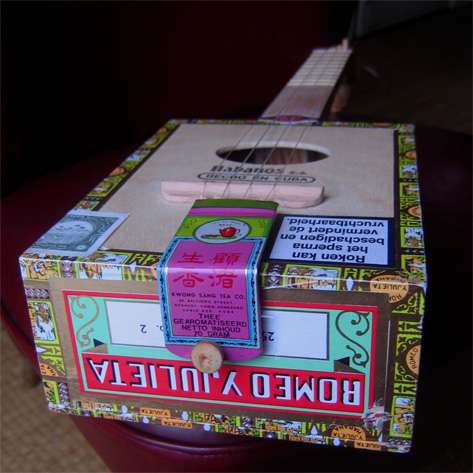 Comment by Ted Crocker on January 28, 2010 at 7:50pm
Very very interesting and informative! Thanks Shelley, you bring a lot to the clubhouse.

Comment by Dave K. on February 9, 2010 at 8:33pm
That's a really sweet-sounding uke, Shelley. And I rather like your rendition of 'Tonight You Belong To Me'. I hope to be able to play that well some day.